KAIROS seeks to create a schema-based AI capability to enable contextual and temporal reasoning about complex real-world events in order to generate actionable understanding of these events and predict how they will unfold.

Understanding world events quickly is critical to informing US national security efforts, and the program aims to create a semi-automated system capable of identifying and drawing correlations between seemingly unrelated events or data, helping to inform or create broad narratives about the world around us (e.g. changes in the natural world or human society).

DARPA in a statement noted that “many events are not simple occurrences but complex phenomena composed of a web of numerous subsidiary elements – from actors to timelines. The growing volume of unstructured, multimedia information available, however, hampers uncovering and understanding these events and their underlying elements.” “The process of uncovering relevant connections across mountains of information and the static elements that they underlie requires temporal information and event patterns, which can be difficult to capture at scale with currently available tools and systems,” said Dr. Boyan Onyshkevych, a program manager in DARPA’s Information Innovation Office (I2O).

Paying homage to cognitive scientist Jean Piaget (and his 1923 definition), schemas are units of knowledge that humans reference to make sense of events by organizing them into commonly occurring narrative structures. For example, a trip to the grocery store typically involves a purchase transaction schema, which is defined by a set of actions (payment), roles (buyer, seller), and temporal constraints (items are scanned and then payment is exchanged).

The program will have to stages:

DARPA will hold a Proposers Day on January 9, 2019 in Arlington to give more information about KAIROS and do a Q&A.

A Broad Agency Announcement that fully describes the program structure and objectives can be found here. 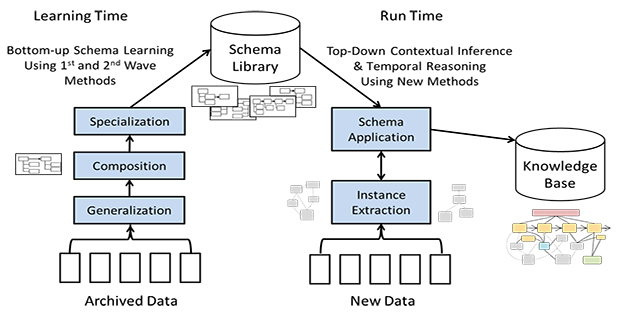 This is a small part of DARPA’s AI Next Campaign, the multi-year investment of $2+ billion in new and existing artificial intelligence programs (including automating critical DoD business processes, such as security clearance vetting or accrediting software systems for operational deployment; improving the robustness and reliability of AI systems; enhancing the security and resiliency of machine learning and AI technologies; reducing power, data, and performance inefficiencies; and pioneering the next generation of AI algorithms and applications, such as “explainability” and common sense reasoning). An important part of the Next AI and KAIROS campaigns will be DARPA’s Artificial Intelligence Exploration Program (AIE), which the agency announced in July 2018. AIE essentially is a series of 18-month high-risk, high-payoff projects. “DARPA has established a streamlined process to push the state of the art in AI through regular and relatively short-term technology development projects,” said Peter Highnam, DARPA Deputy Director.

Highnam was appointed Deputy Director in February 2018. He spent four years at DARPA managing electronic warfare and airborne communication in the late 90s, including the Advanced Tactical Targeting Technology (AT3) program, before heading up IARPA (Intelligence Advanced Research Projects Activity) and the NGA (National Geospatial Intelligence Agency), for a decade altogether.

He spent another decade in applied reserach at Schlumberger after finishing his PhD in Computer Science at Carnegie Mellon.